Apartment in the residential complex Symbol

Apartment in the residential complex Symbol

The interior was created for a young man in his early 30s, as a space in which he will live and work. The apartment is located in the Symbol residential complex – a modern new business class building that attracts with an ambitious sound of architectural appearance combined with a special intimacy of courtyards and convenient apartment layouts.

The owner of the apartment wanted an interior "with a masculine character", brutal, with loft elements, but at the same time strict, sustained and not contradicting the architectural appearance and mood that prevail in the residential complex Symbol. The customer immediately voiced the principal wishes: the presence of a large bath in which you can lie down, a full-fledged workplace and a fenced sleeping area with a bed. It was also necessary to provide a place for home training with weights. The idea of a folding sofa was abandoned immediately in favor of a full-fledged sleeping place, since we believe that in the studio space the sofa is often kept in a disassembled state, which clutters up the space and creates a visually untidy appearance.

As a result, we managed to create a stylish and concise space, a modern and dynamic studio for a young man living in the rhythm of the city. The area of the apartment is only 40 square meters, but at the same time it turned out to embody the client's wishes as much as possible. The dressing room was abandoned in favor of spacious built-in wardrobes. A small laconic kitchen with a bar counter instead of a table, since the customer does not cook. In the center of the apartment there is a relaxation area with a sofa and a TV for a cozy and relaxing holiday. A functional and comfortable workplace, as the landlord prefers to work from home. The sleeping place was organized in the form of a mattress built into a wooden podium. You can protect yourself from the rest of the apartment with a sliding glass partition. 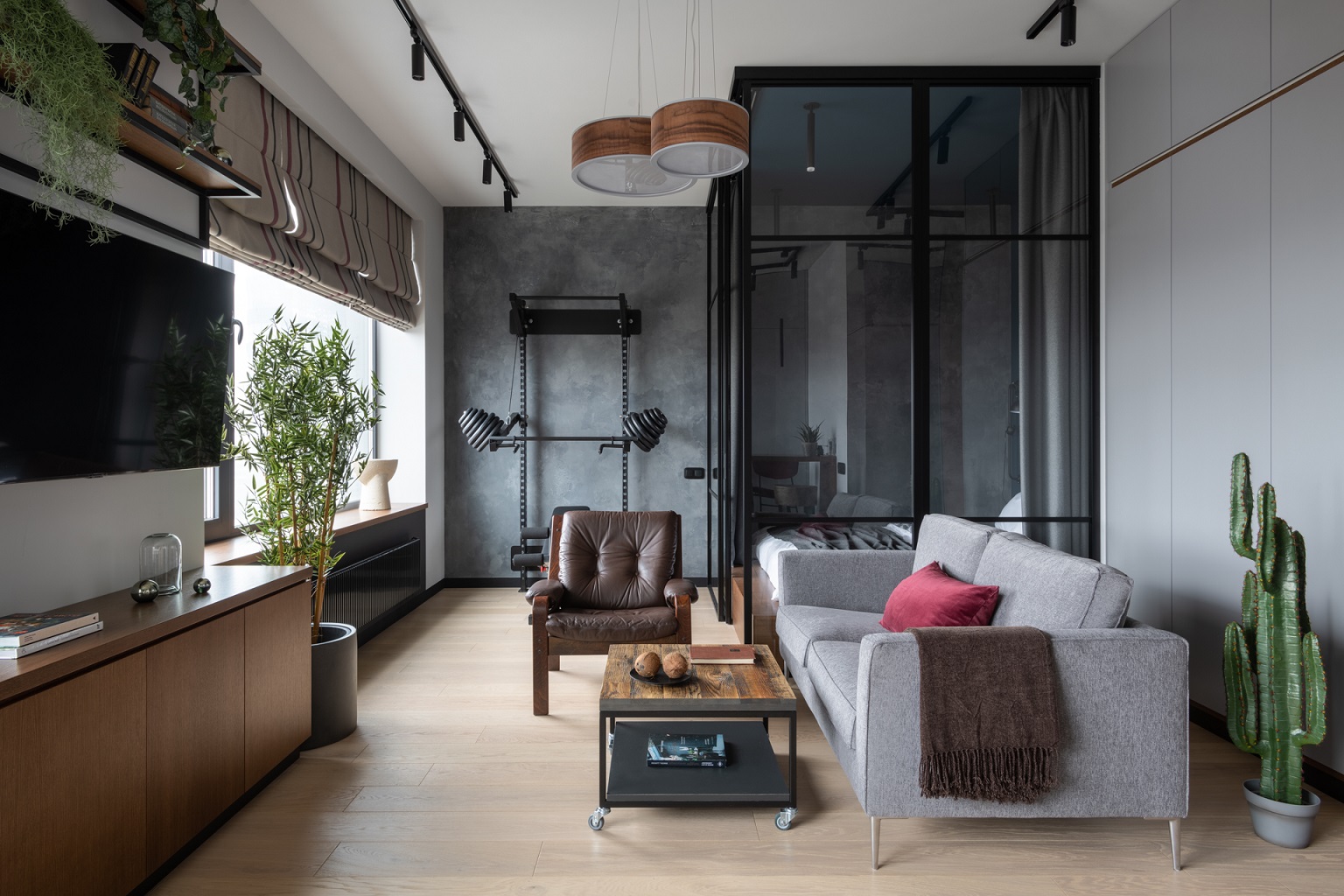 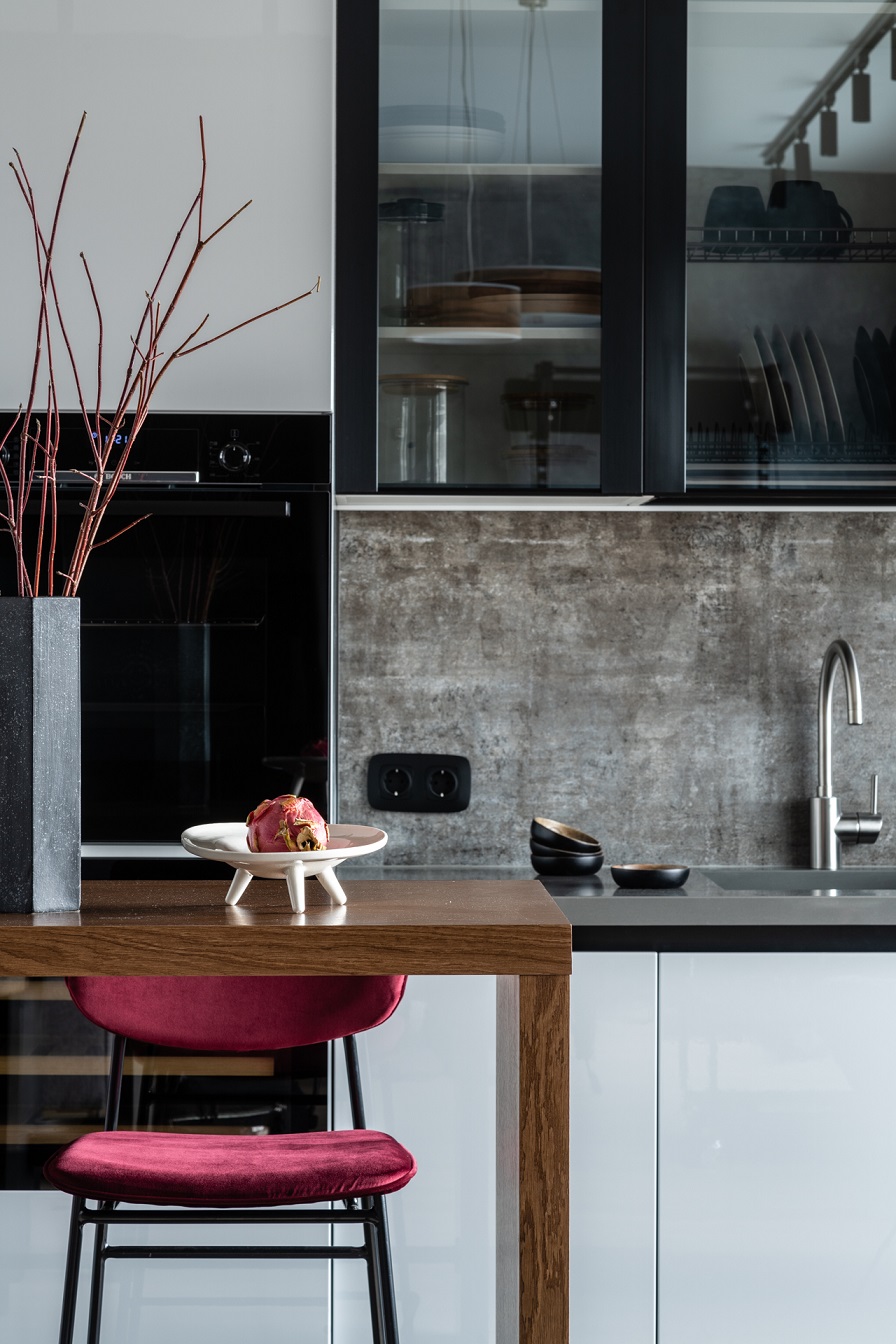 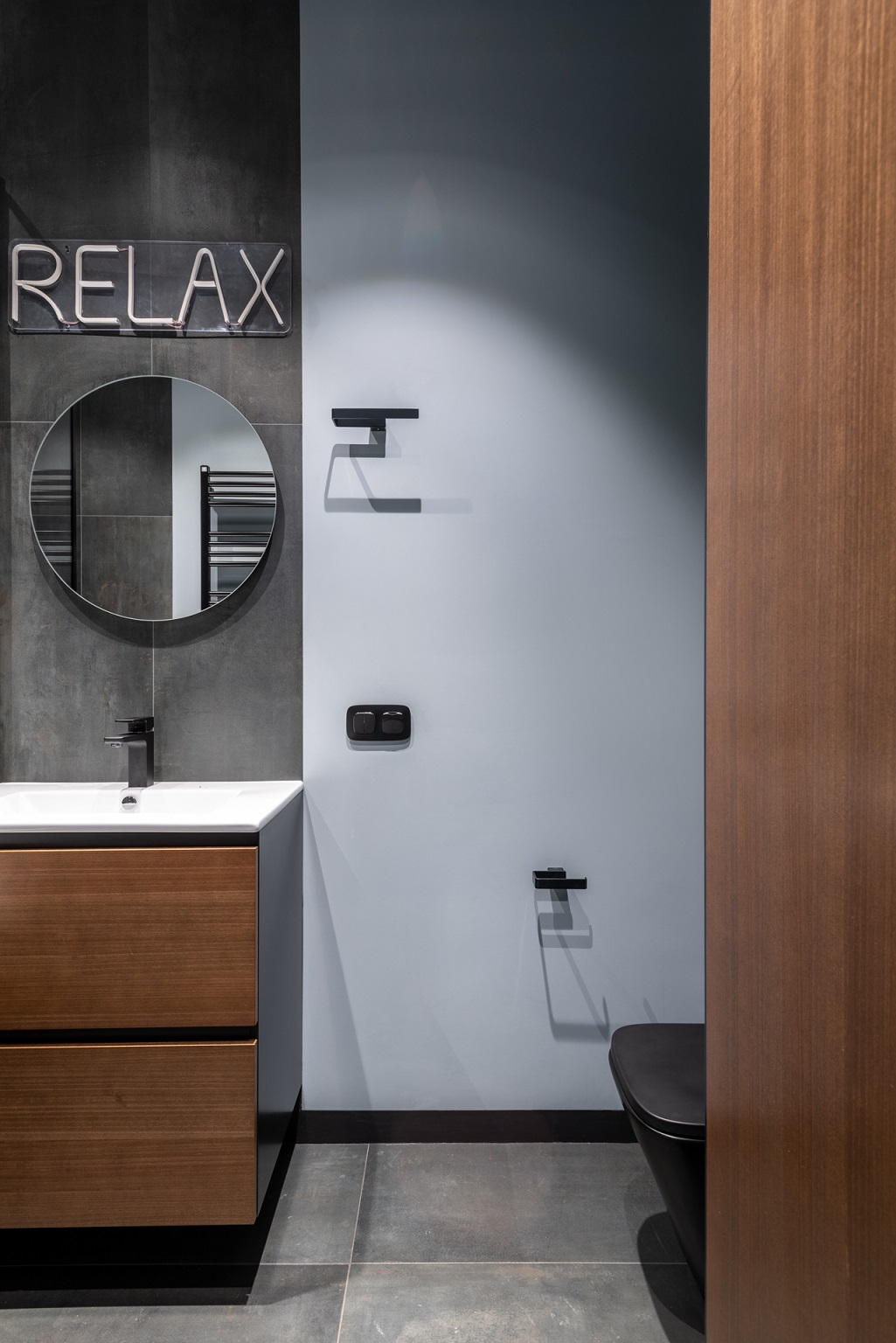 All storage systems in the apartment are built-in, but at the same time they are designed in such a way that visually it does not seem that these are cabinets. Thanks to this, the corridor looks restrained and concise. A built-in wardrobe with a seat, sitting on which you can put on shoes, is adjacent to the built-in door to the bathroom of the Sofia factory. The interior is dominated by verticals, the space of the entrance area seems to be divided into "sectors" of the overlapping finish. Doors, storage systems, mirror canvas at the entrance – everything is done "to the ceiling". This creates a graphic rhythm and allows you to emphasize the height of the ceilings and distract from the small dimensions of the apartment. The light is selected track, black, as restrained and concise as possible. All joinery is made in our carpentry workshop, the entrance door of the Gerda factory is also finished with veneered joinery panels to create unity of space. On the floor is porcelain stoneware, Flaviker. 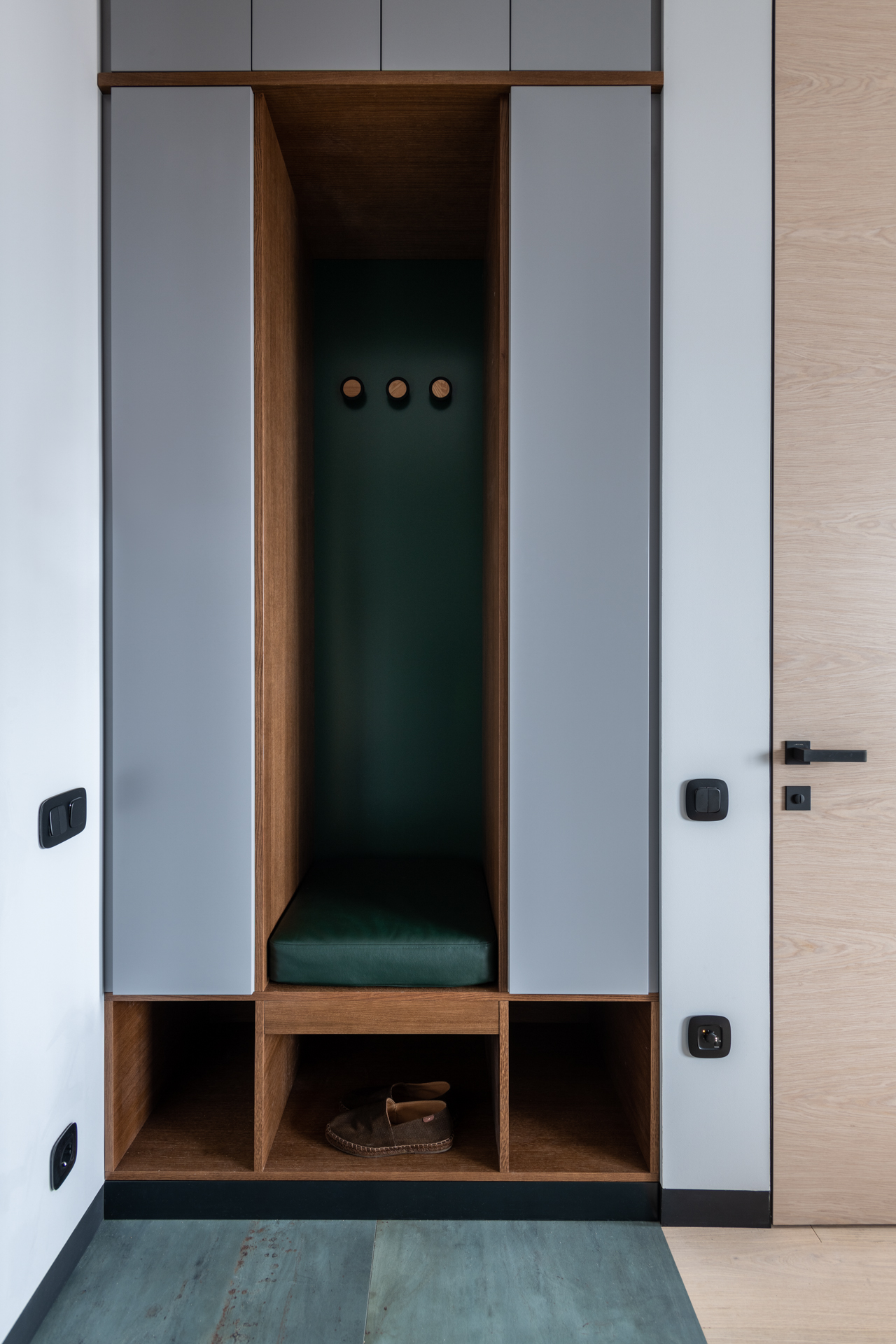 The kitchen of the Russian factory "Maria" is designed in a laconic minimalistic style. It is also dominated by the vertical, formed by accent black inserts between the facades. The main material of the kitchen is matte gray MDF, the upper facades are made in mirrored glass with black metal frames. Household appliances were chosen black, to match the inserts. Since the owner hardly cooks, we settled on a two-burner hob, an oven with a microwave function and a wine refrigerator. The table top is made of quartz agglomerate. On the floor and on the apron there is an identical dark porcelain stoneware with the structure of the Flaviker brand stone. The light was made track, as everywhere else in the apartment, three hanging lamps were placed above the bar. The bar counter is a solid oak bracket made in our carpentry workshop. Chairs from Archpole and Deephouse factories. 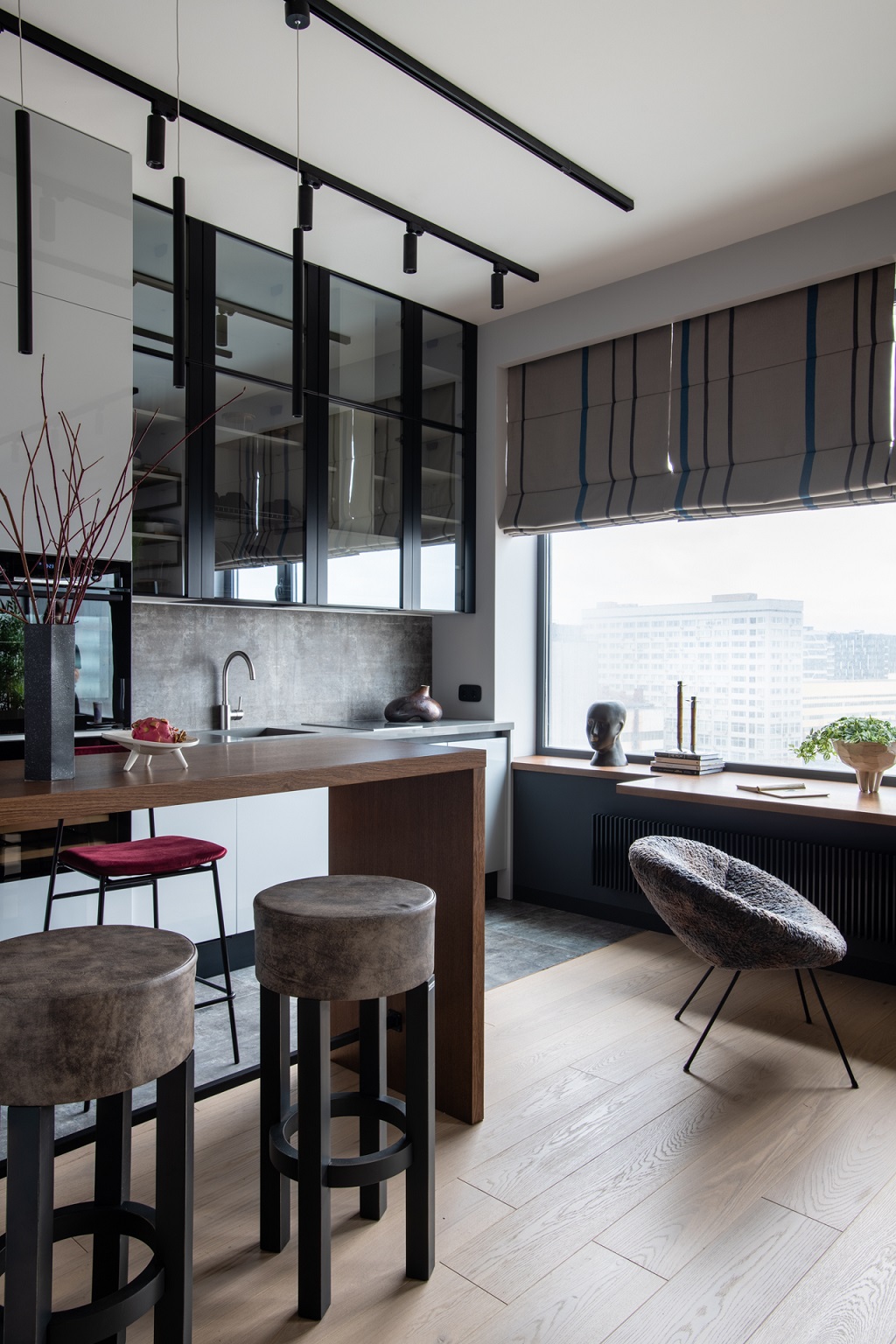 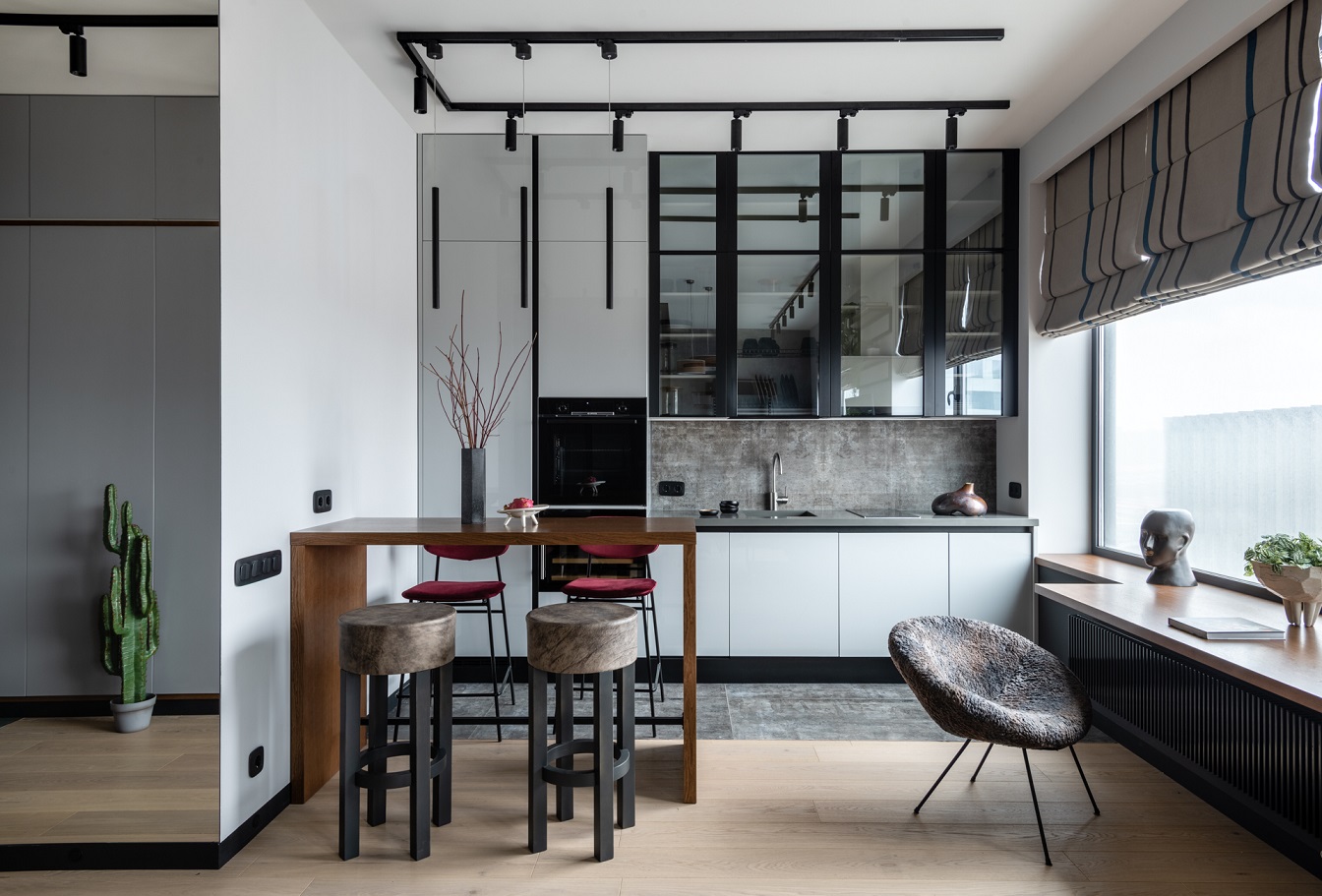 The workplace is a window sill with a cantilever extension, made in our carpentry workshop to order. The windows in the apartment successfully start at a height corresponding to the standard height of the table, which we did not fail to use. Vintage chair, Repeat Story, textiles from our permanent partner Luxshtora. The radiator is tubular KZTO Harmony. The workplace turned out to be as concise and functional as possible. It smoothly transitions into the TV zone. In its lower part, a cabinet was organized, where the necessary equipment was placed. In the upper one, shelves were placed under the decor. All wooden products were made according to the drawings in our carpentry workshop. 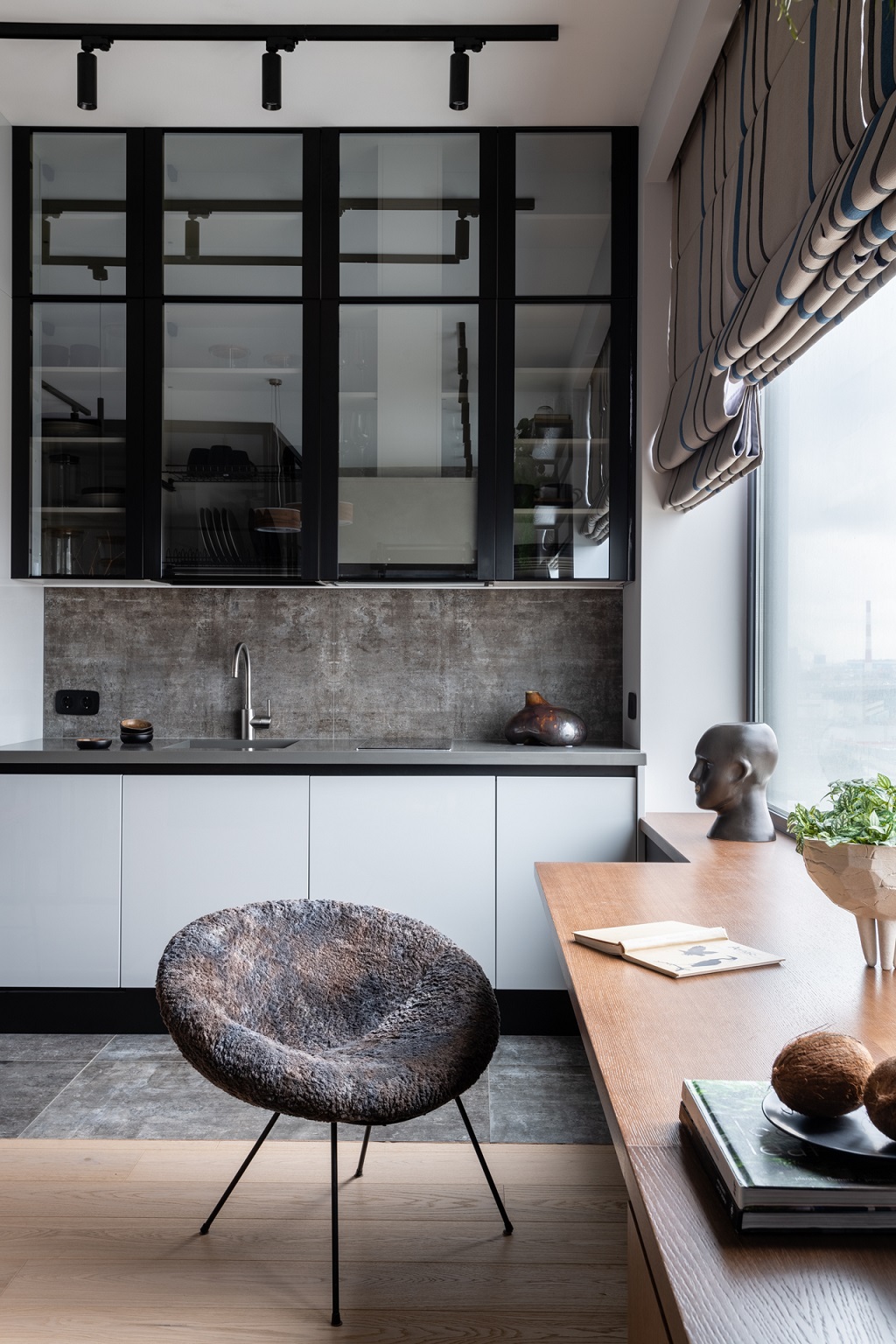 The living room is a place to relax after a busy day. A fairly soft and cozy sofa from the factory Sits, an Archpole table, an armchair - an original vintage from Repeat Story. Hanging lamps from Lampatron factory are finished with wood veneer. In fact, these are the only decorative lamps in the entire apartment. A built-in wardrobe continues behind the living room area, coming in from the hallway at an angle. Visually, it looks like a wall in a laconic finish with MDF panels. The wall opposite the kitchen is decorated with decorative plaster for concrete, there is a home simulator – this was a very important wish of the customer. 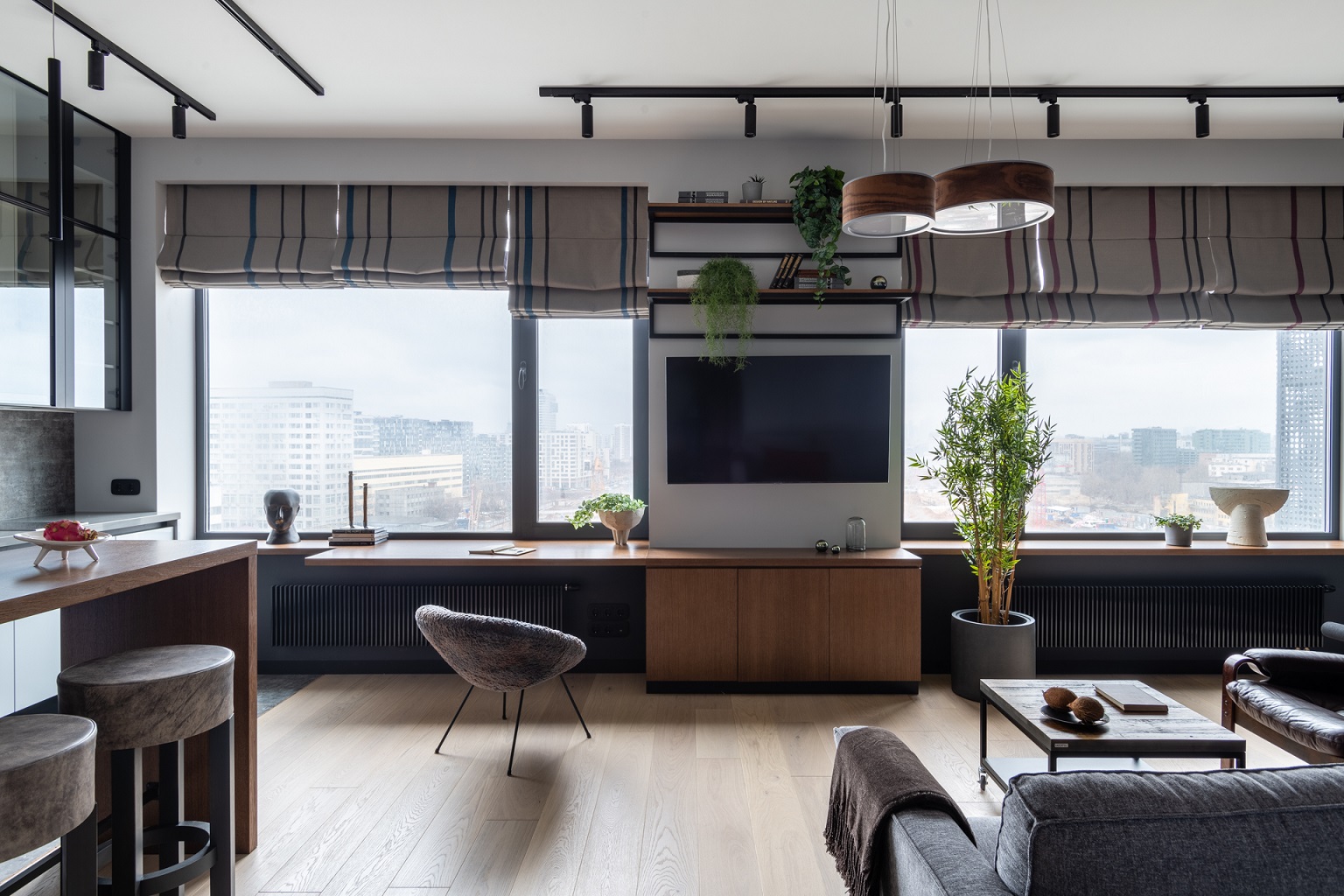 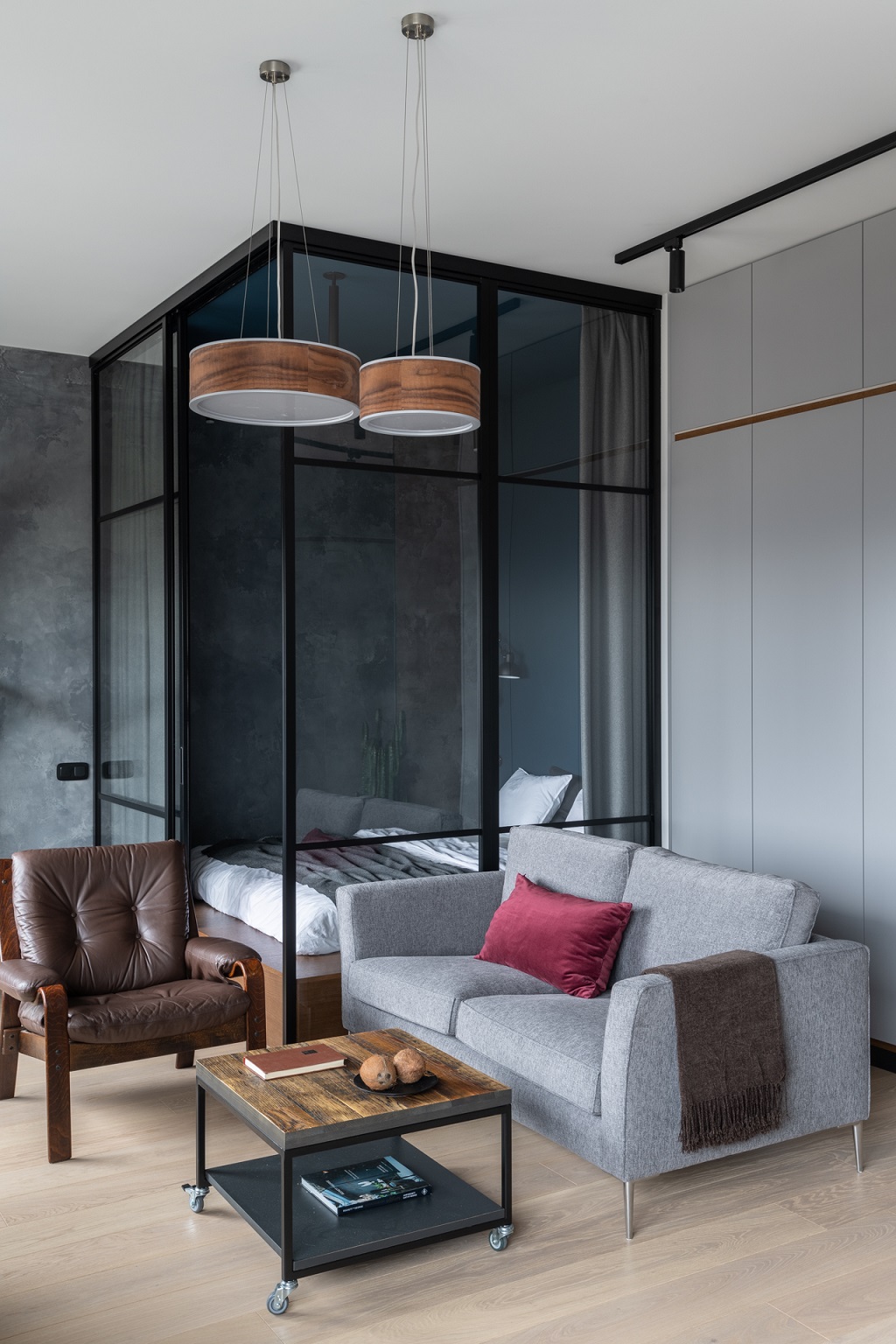 The sleeping area is fenced with laconic glass partitions in a black frame, made by the Grace Glass factory. The podium is wooden, made in our carpentry workshop, there is a mattress on it. Actually, this is the sleeping area. The bed was abandoned due to limited space, but at the same time, the resulting solution is not inferior in functionality and convenience to a full-fledged bedroom. Sockets were installed in the bedside area. On the side there is a sconce for reading in the evening, and on the other side there is a neon inscription "Bring on the night", which glows pleasantly in the night and creates a cozy chamber light. The sleeping area was highlighted in color – a calm and deep blue saturated shade that creates a feeling of night and the night sky. The bathroom came out minimalistic, in a brutal style. It has only two shades: black and dark gray and natural wood. A little animation is added to the interior by a phytosten over the toilet and a neon inscription "Relax", which lights up with a pleasant green light. All plumbing in the room is black. The built-in furniture, which hides a full-fledged laundry room, is made to order in our carpentry workshop. 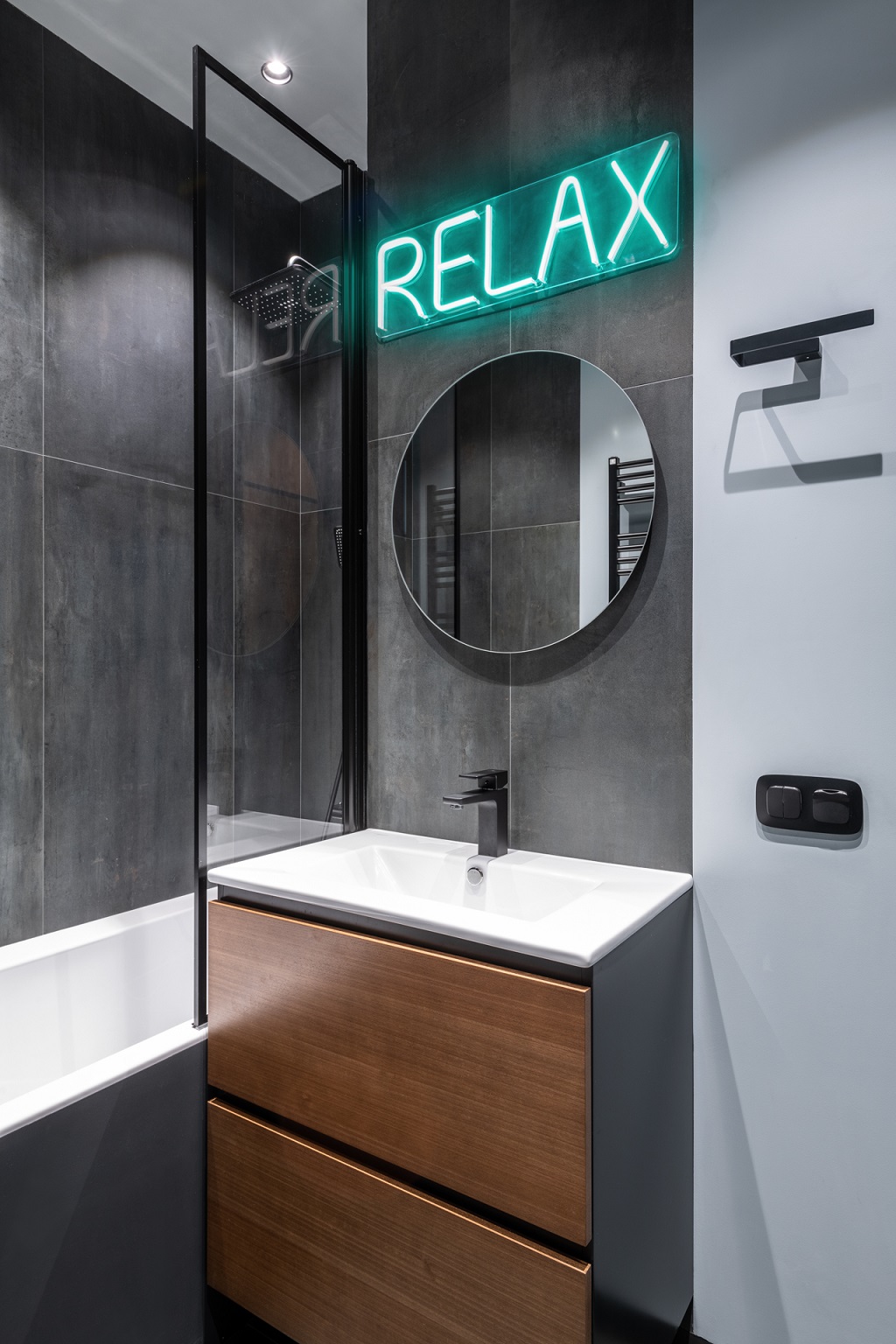 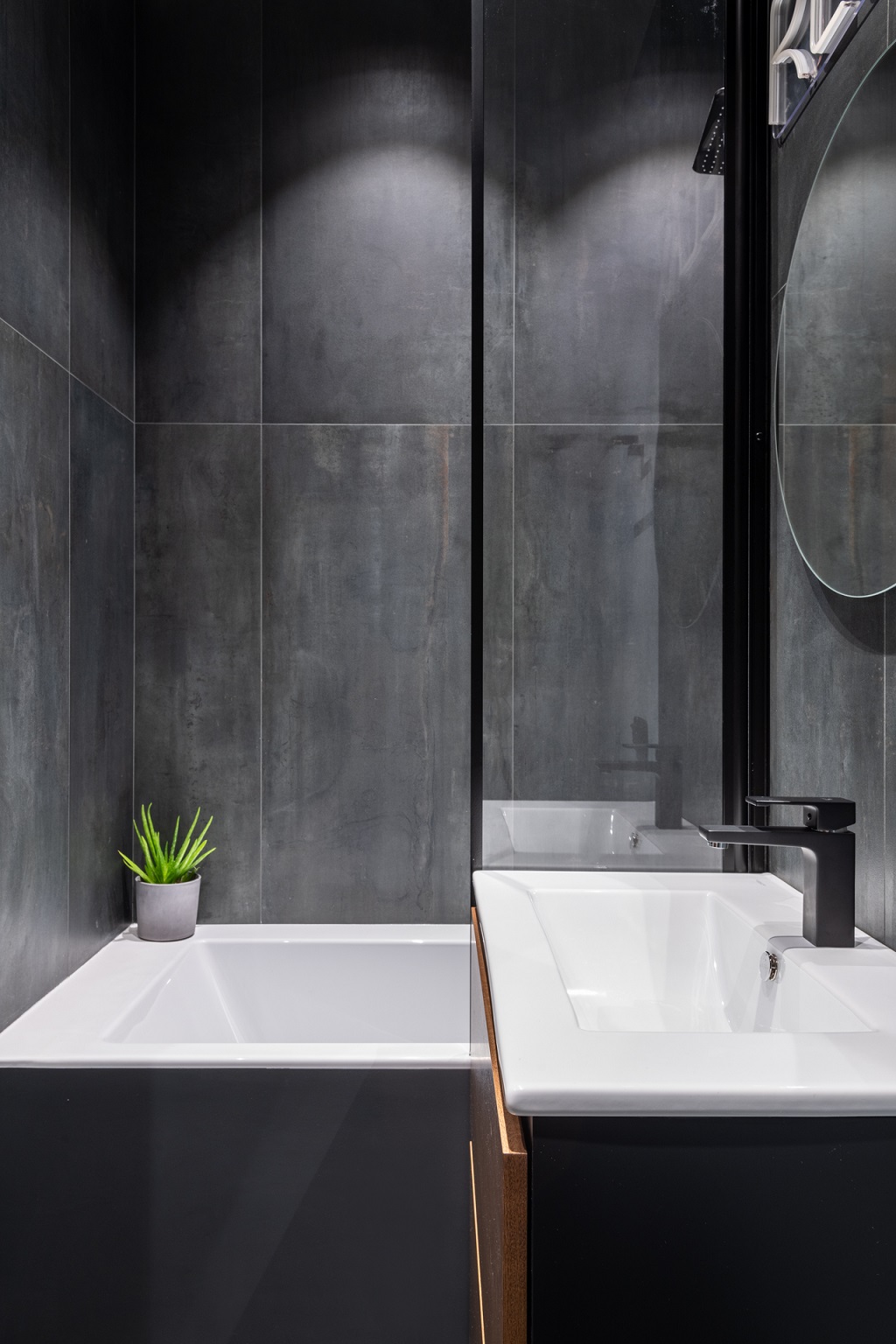 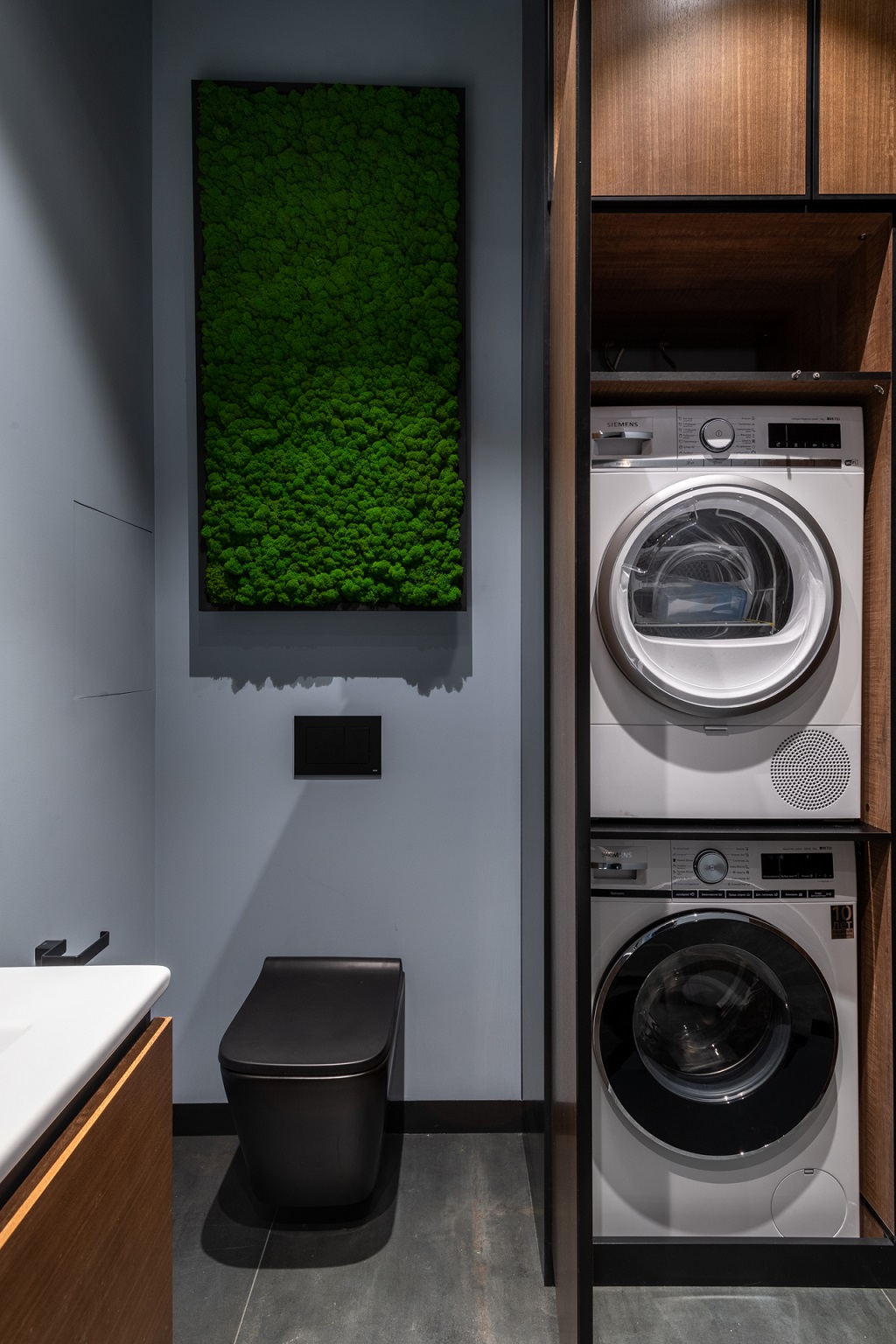 Professional photo session
Call us!
We create the history of your interior